The Galapagos Islands are a living museum of evolutionary changes. Free and fearless animals, which are unique worlwild, make  visitors wonder about their very existence on our planet.
The Galapagos Islands are declared as a World Natural Heritage Site and World Biosphere Reserve by the UNESCO. Among the animals found in the Galapagos, the most recognized are the different species of  Galapagos giant tortoises because the Island is named after them.

Also, a very big variety of birds are found in the Galapagos. Some of them are: the blue footed, red footed  and masked boobies, flamingos, albatrosses, frigate birds, unique small  penguins and 14 different species of finches.  These various species of finches serve as proof of Darwin’s theory of  evolution and natural selection, actually it was here where he began he investigation about changes in species which concluded in the theory of evolution.
Marine mammals such as sea lions,  dolphins and whales are also found; as well as multitudinous colorful  fishes. 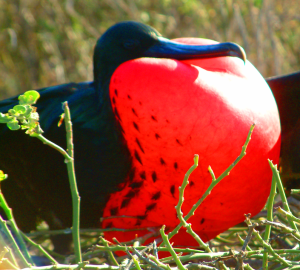 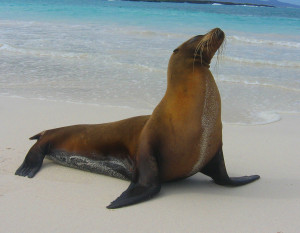 The origin of the  Galapagos Islands is volcanic. The islands appeared from  lava eruptions that

came from the bottom of the ocean and that rose as  much as 2.600 ft. above sea level. Lava from more than 2.000 craters  has continuously altered the terrain of the region.
In 1959 the  Government , along with the Charles Darwin Foundation, UNESCO, and other  international scientific organizations, established a biological  research station on the islands. All tours take you to a visit of the  Station. Scientist greet visitors while they instruct on the marvels of  the islands.

The  interior waters of the Galapagos Islands, plus those within 40 nautical  miles measured from the baseline of the Archipelago, were declared the  Galapagos Marine Reserve on 1994. This is the only protected coastal  marine area in the east Pacific, and the second largest Marine Reserve  in the World. It holds approximately  51.351 square miles of the  interior waters of the Archipelago. There are many areas with small  submarine volcanoes, which are important feeding zones for marine birds  and mammals. The submarine area of Galapagos (0 to 590 ft. deep) is of  2.587 square miles. 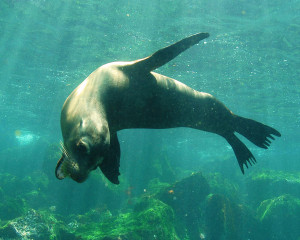 Do not miss the chance to  snorkel with sea lions, penguins, a variety of colorful fish and even  inoffensive sharks. Diving tours are offered for those who are willing  to take a deep adventure.

The best way to visit the Galapagos Islands, and the best way to enjoy the wonders these beautiful islands have to offer, is by taking a cruise. With a cruise one gets to know different and more islands of the Galapagos than one would see by any other way. This means the 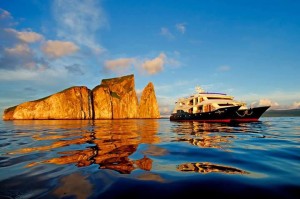 One Response to The Galapagos Islands